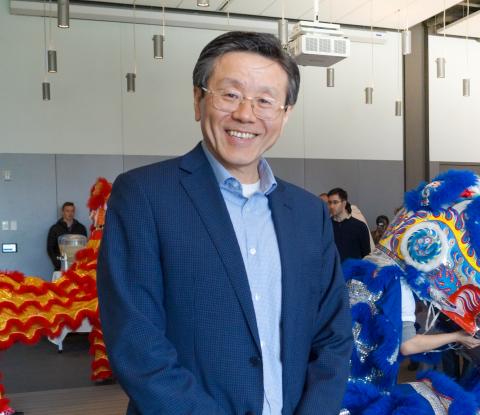 By harnessing the often-strange behavior of matter at the tiniest scales, quantum technologies could open the door to ultra-fast computers, new kinds of sensors, uncrackable information security and other revolutionary technologies.

This academic year, Brown researchers have won four new federal grants — totaling well over $6 million — to study exotic quantum states and materials that will power these next-generation devices. The awards are a testament to the expertise in quantum science across Brown’s faculty and the University’s ability to bring those people together, said Gang Xiao, physics department chair and principal investigator on one of the new grants.

“Brown has great strength in quantum science, particularly in theoretical research, in device design and materials development,” Xiao said. “The synergy among faculty is further leveraged by the efforts of Brown’s research office, which has organized a series of events for faculty to brainstorm and to execute on our quantum objectives. Strength and collaboration have allowed us to capitalize on funding opportunities.”

The grants are part of a push by U.S. science agencies to develop new quantum technologies and make new discoveries. In early 2019, President Donald Trump signed into law the National Quantum Initiative Act, a multi-agency program to support research and training in quantum information science. The initiative builds on other quantum science programs at the National Science Foundation (NSF) and other agencies.

Brown’s funding since the quantum initiative was launched includes a $4 million research partnership between researchers at Brown and Dartmouth, led by Vesna Mitrović, a professor of physics. The project aims to develop a fundamental understanding of quantum systems in order to better control them for use in quantum technology. In addition to Mitrović, the Brown team includes theorists and professors Dima Feldman and Brad Marston.

Mitrović will lead two other recently awarded quantum grants. One of those is an initial-stage award from NSF’s Quantum Leap Challenge Institutes program, which will help Brown build capacity toward additional Challenge Institute funding. Another grant funds Mitrović work on the exotic quantum states that emerge from spin-orbit entanglement, the interaction between the orbit of an electron around a nucleus and the electron’s spin (its individual magnetic moment).

Xiao’s grant, which is a collaboration between faculty in physics and engineering, aims to create a “magnetic camera” to image the magnetic fields created by quantum materials. The proposal, which was awarded $2 million from NSF, emerged in part from a meeting organized by the office of Jill Pipher, Brown’s vice president for research.

“She invited us to a brown bag lunch where we gave talks about what we do,” Xiao said. “That helped us to form teams that could identify interesting and important problems and work toward solutions.”

Pipher plans to continue looking for ways to bring researchers together to advance quantum science.

“Quantum technology is one of the most exciting and dynamic fields of research today, with the potential to drive huge advances in solving a range of problems in society,” said Pipher, who is also a professor of mathematics. “Brown’s research office is helping faculty across several fields, including engineering, physics and chemistry, to harness their collective expertise, to build robust collaborations and then to pursue and win major funding opportunities.”

By harnessing the often-strange behavior of matter at the tiniest scales, quantum technologies could open the door to ultra-fast computers, new kinds of sensors, uncrackable information security and other revolutionary technologies. This academic year, Brown researchers have won four new...