It is already well-established that light’s intrinsic properties of polarization, wavevector, and frequency (or at the level of single photons: spin, momentum, and energy) can be utilized to trap and tweeze mesoscopic objects in solution, increase spatial resolution in microscopy, and encode information optically.  At PROBE, we are always interested in continuing along these lines by pushing the limits of what can be done with light. To this end, we are developing an “optics toolshed” of techniques that can readily be integrated into an optical microscope for imaging, tweezing, or characterization experiments for applications relevant to both biophotonics and nanophotonics. 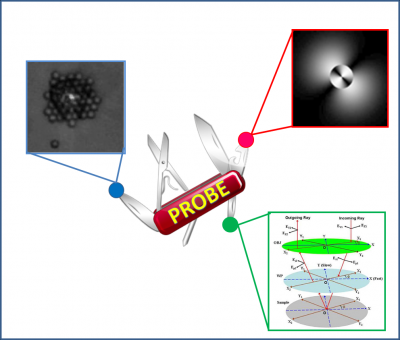 An important tool for us relates to the generation of optical vector fields, which are characterized by a non-uniform polarization distribution. We have shown that the polarization diversity intrinsic to vector fields could be harnessed for fast, high-resolution, characterization of various materials, including materials [Opt. Exp. 17, 21396 (2009)]. We call this technology Rapid Mueller Matrix Polarimetry (RAMMP). Vector fields that yield beam-like solutions to the wave equation, so-called “vector beams,” are intensely studied and sought after for their unusual properties upon tight focusing. Sometimes referred to as “doughnut beams” because of their on-axis intensity null, two of the most popular vector beams, radially and azimuthally polarized light, have the unusual properties of leading to an enhanced longitudinal component of the electric or magnetic field, respectively, when tightly focused. Applications of radially polarized light have ranged from superresolution microscopy and dipole-orientation imaging to high-density optical data storage and particle acceleration. We have developed both interferometric and non-interferometric methods for generating vector beams. For the interferometric approach, we employ common-path interferometry to obtain phase stability at the expense of limited versatility [Opt. Lett. 15, 12017 (2007)]. Our noninterferometric approach, although sensitive to diffraction effects, is stable and generates a broad class of vector fields. We are currently exploring the application of vector fields in coherent nonlinear imaging (e.g., SHG microscopy) and for probing nanoparticles.  Yet another area related to vector field generation, is arbitrary 3D polarization control. Previously, we have shown theoretically that control of the electric field vector in 3 spatial dimensions at the focus of a high-NA microscope is possible by encoding an input optical field with specific azimuthal spatial harmonics [PRL 96, 153901 (2006)]. In collaboration with researchers at the University of Central Florida, an experimental realization of this is currently underway. Among its many potential applications, 3D polarization control holds promise in extending the achievements already made by polarization-based microscopy techniques, and adding dexterity to the quantum control of preferred reaction pathways in molecular systems.

In the general area of optical particle manipulation using optical tweezers, we are working on improving technology by: increasing biocompatibility by reducing the required power density in a trap, increasing the effective working area for trapping objects, incorporating spectroscopy, and combining with the aforementioned vector beams.  To-date, we have demonstrated successful trapping and manipulation of micro particles using a common laser pointer by combining with plasmonic nanoantenna arrays. We have also experimentally verified that the axial trapping efficiency of a conventional optical trap can be increased (at the cost of reduced lateral trapping efficiency) by employing radially polarized light [N. J. Phys. 12, 073012 (2010)].

Finally, we are also exploring tools that will facilitate deep tissue imaging through turbid media. Taking advantage of the recent progress in studies of optical transmission through disordered materials, and the advancements in spatial light modulator technology, we collaborate with researchers at Boston University in developing fast and robust methods for transmitting light through dynamically changing disordered materials. The work, sponsored by the National Academies Keck Futures Initiative (NAKFI), could greatly improve all optical imaging modalities where the penetration depth is limited primarily by strong optical scattering, as well as remote surveillance through opaque screens.